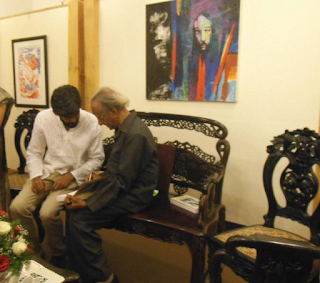 The newly released biography Vamona Navelcar: An Artist of Three Continents, published by Reality PLC Pune with the support of Village Sanctuary Arts, is as much about the life of a Goan artist as it is about interrelated histories within Goa’s geography and beyond. Anne Ketteringham, the author, a retired British aeronautical engineer and birdlife photographer, attended the April release of her book at Fontainhas’ Gitanjali Gallery where a retrospective of Vamona Ananta Sinai Navelcar’s art was on display. The now octogenarian’s eclecticism is apparent in the multitude of styles he employs, from line drawing to painting, that match equally varied themes, including religious iconography, contemporary issues, and cityscapes as could be seen in the exhibition. Navelcar, also in attendance, had little to say, but there was a palpable sense of the meaningfulness of this belated recognition in his own homeland. His biographer noted the difficulties of her writerly task, which included researching Navelcar’s life and dealing with her sometimes reticent subject. Ketteringham spoke of the inevitability of miscommunication during the process as she is “hard of hearing and Vamona is a soft-spoken man.” This conjures up an image of silent pauses full of intense meaning which, along with the theme of miscommunication, aptly characterises Navelcar’s life as the book represents it.

Ketteringham’s text chronicles Navelcar’s life story and his evolution as an artist who was affected by such historical events as Goa’s decolonization, Mozambique’s freedom from the Portuguese and its post-independence struggles, as well as the Carnation Revolution which ended Portugal’s Estado Novo. In 1950s and 60s Lisbon, Navelcar was a starving student. His art scholarship had been temporarily revoked, allegedly due to his refusal to become embroiled in Goan diaspora politics. Throughout the text, Navelcar’s avoidance of thinking of himself as being political is highlighted, but the events of his life prove otherwise. If not always through his own direct participation, it would appear that Navelcar was embroiled in political goings-on that were of national and even international import. A case in point is the scholarship the then young artist received to study in Lisbon, which was bestowed, as the book informs, “by the prime minister of Portugal” himself – one Dr. António de Oliveira Salazar. Conjecture might allow that this was a propaganda move on the part of the Portuguese dictator, especially as it came in the years following India’s independence from the British.

As a teacher in 1970s Mozambique, despite his artistic support of anti-colonialism, Navelcar was hauled off 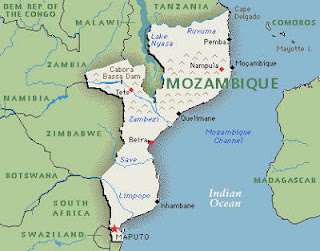 to a “rehabilitation camp.” Though offered release, he would not leave without his students. The artist’s diasporic history raises interesting questions about the nature of Goan immigration through colonial networks. While there has been some scholarship on the movement of Goans between Portuguese and British India and, from there, to other British colonies, how might the picture be seen differently through the lens of migrations via Portuguese territories themselves?

Deeply hurt by his experience in Africa, Navelcar returned to Portugal when, tragically, much of his art disappeared en route. The lack of opportunities in post-Estado Novo Lisbon had Navelcar make his way back to Goa where he has lived an exilic life in his native land. Ketteringham’s book and the retrospective are important steps in bearing witness to Navelcar’s legacy while he still lives. Though the biography could have benefitted from better editing and a sustained critical perspective, it speaks to a Goan identity hewn beyond its own boundaries and the significance of an artist capable of painting that complex picture.

The print version of this article can be seen online. 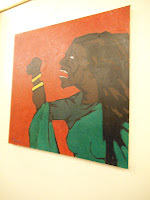 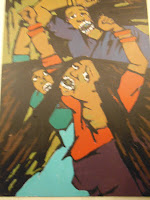 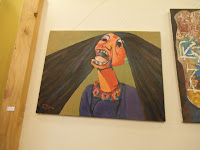 Posted by the nightchild at 2:08 AM 2 comments: 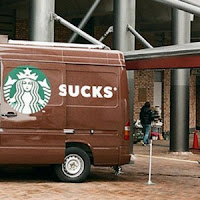 “STAR-BUCKS,” my brother-in-law articulated into his mobile phone.

The irony was delicious. We were having difficulty finding the newly opened Starbucks in Bombay, and now directory services seemed to be confused as well. In Southern California, one can’t go far before tripping over the ubiquity of Starbucks stores, where there are sometimes even three within the same city block. So, on this visit to India, why did I need to find the Bombay one so badly having never really been a fan of their beverages in the first place? I wanted to know if they sold chai.

Yes, it was perverse. But haven’t you had a chuckle over the nomenclature employed across coffee shops in 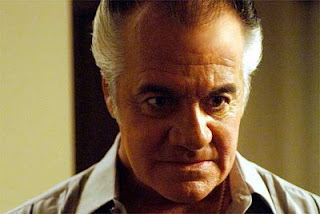 the United States? What exactly is a chai tea latte, anyway, and do they not get that it is tautologous to say chai and tea? But I needed to find out firsthand what it would feel like to order chai at an American coffee shop in India. It was no different from the revulsion I had to overcome in taking my first yoga class ever in Los Angeles. Sweating it out Bikram-style reminds me of an episode from the erstwhile television show The Sopranos. In it, Paulie “Walnuts” Gualtieri sounds a lament as he bears witness to the dilution of Italian culture during a visit to a coffee place that is meant to stand-in for Starbucks. Colourfully, the Italian American gangster expounds: “[expletive] espresso, cappuccino. We invented this [expletive] and all these other [expletive] are gettin’ rich off it.” Paulie becomes so impassioned that he makes off with an espresso machine as his vendetta against the culture vultures. To this day while I will grudgingly admit to loving how I can now contort my body in ways I would never have dreamed possible, I still refuse to say Namaste at the end of a much-deserved and blissful shavasana. 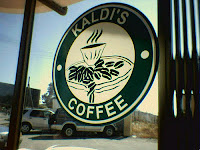 Of course, what Mr. Walnuts gets wrong is that though the Italians may have found ways to add chic to a cup of joe, it was the Ethiopians – once embroiled in Italy’s imperial designs – who originated the brewing of the drink. And just as one might guess that the inspiration for the coffee place being derided in The Sopranos was Starbucks, there is no mistaking the similar motivation behind the green and white colour scheme of the logo for Kaldi’s, an Ethiopian coffee chain. Named for the goatherd of native legend who is said to have noticed the energizing effect of coffee bean consumption on his animals, Kaldi’s is famed for its own versions of Starbucks’ favourites. If Starbucks can serve chai, then one supposes it is fair game for Kaldi’s to rip off a Caramel Macchiato. As much as I would like to think that Kaldi’s was reappropriating from Starbucks what was really theirs to begin with, on a recent visit to Addis Ababa and because it was my first time there, it seemed wrong to sample the Ethiopian elixir at any place other than a non-descript mom and pop shop. I felt as invigorated by the experience as after a rapid fire bout of Surya Namaskars.

Despite the backhanded homage paid to it, Starbucks is still to set up its own shops in Ethiopia. But that is not to say that the Seattle-based business has not had an impact on the country both culturally and 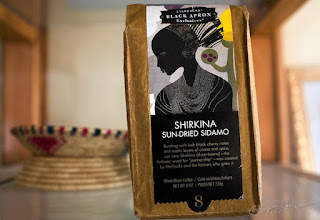 economically. Between 2005 and 2007, a storm brewed in, shall we say, a coffee mug when the Ethiopian government alleged intellectual copyright infringement in the trademarking of coffees sold at Starbucks under such regional names as Shirkina Sun-Dried Sidamo. The capability to uniquely brand affects pricing. By adopting names associated with Ethiopia’s coffee-growing regions, for the purposes of branding, Starbucks was in a position to undercut Ethiopia’s capacity to not only name but also price their own regional products. In turn, this threatened the livelihoods of subsistence-level farmers in one of the poorest nations in the world where coffee is a major cash crop. Up against a company known for its pricy lattes, the issue was resolved in 2007 most likely to avoid a public relations fiasco. Starbucks promised greater cooperation with the Ethiopian government, but changes on the ground are yet to manifest given the ability of the large corporation to control demand.

Starbucks has continued to court controversy internationally. In 2012, it had come to light that the company had paid no corporate taxes in the United Kingdom for three years. In response to customer outrage, the coffee chain announced that it would make good on its unpaid dues to the tune of 20 million pounds over the course of two years. Despite these issues around the globe, there is no doubt that Starbucks has iconic status globally while serving as a symbol of globalization. 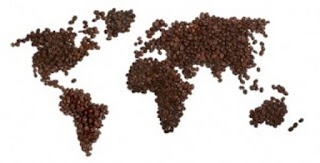 Although having set up their first shop in mainland China in 1999, Starbucks’ was late to the coffee party in South Asia. The metro hubs in India were already familiar with Costa Coffee from the United Kingdom and even The Coffee Bean and Tea Leaf, a business with a strong Southern Californian connection. These are in addition to such home grown chains as Cafe Coffee Day and Bru World Cafe. Nonetheless, when Starbucks finally did makes its debut as a Tata Alliance company in October 2012, its first Indian store in Bombay drew queues so long that a security guard had to effect crowd control. Since, Starbucks has gone on to open a few more shops in Bombay and Delhi, catering to the local palette with items like paneer wraps alongside muffins. 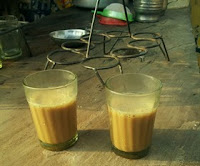 A couple of months after its Indian establishments joined the corporation’s worldwide constellation, my efforts to visit the first desi Starbucks in Elphinstone Building, a colonial era landmark, were met with failure. Finally able to make our intent understood to the directory services operator assisting us with our query, we discovered that our taxi had just overshot the location. It would take forever to manoeuvre through rush hour traffic. On this the end of my time in Bombay, the opportunity to order a chai in the land of its origins, but as translated by Starbucks, had passed me by. I could not help wondering if I had missed much while I, instead, settled for a cup of cutting tea at a local stall.

To see the print version of this piece online, visit here. 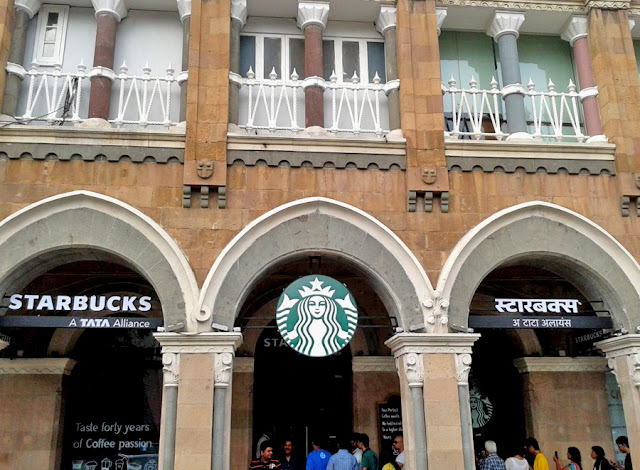 Posted by the nightchild at 11:19 PM No comments: