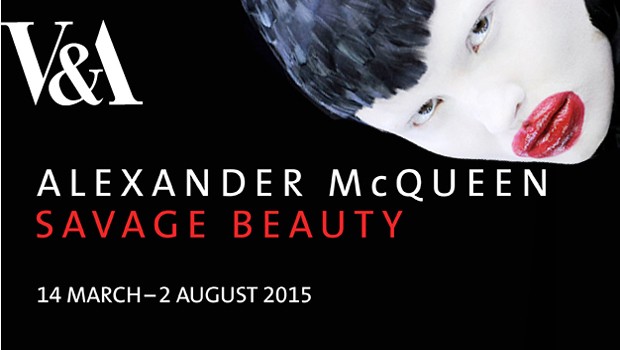 At its close, earlier this month, “Alexander McQueen: Savage Beauty”, a retrospective of the late fashion designer’s works, broke records at the Victoria and Albert Museum (V&A), by becoming the London institution’s most visited exhibition ever. The visual spectacle of McQueen’s creations were worth the trouble of acquiring a ticket to the popular event, especially since I had been unlucky on my first try as the exhibition had sold out for the day. Yet, what was also interesting was the manner in which the V&A had attempted to manage the Scottish designer’s critique of British imperialist history as manifested through his creativity. 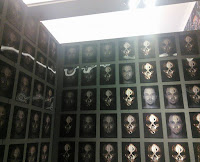 In one of the first rooms of the exhibition, viewers saw pieces from McQueen’s Autumn/Winter 1995 collection titled “Highland Rape”. Controversial not only for its title, the clothes were inspired by the designer’s ethnic heritage, particularly in regard to the atrocities meted out to Scots during the Highland Clearances in the eighteenth and nineteenth centuries. On a runway symbolically littered with heather and bracken to represent the Scottish highlands, McQueen’s models appeared to be visibly distressed, a feeling echoed in the deliberately revealing garments, some in tartan and with shapes mirroring bodice designs of the previous century. Sometimes described as an example of ethnic cleansing, the clearances saw a dramatic change in the pastoral lives of many Scots, with relocation to other parts of the world being a related outcome. The theme of this legacy of the struggles of the Highlanders would also be echoed in the Scotsman’s collection just over a decade later. His 2006 collection, titled “Widows of Culloden”, also made use of tartan, and specifically the MacQueen (sometimes referred to as McQueen) Clan tartan. But where the previous “Highland Rape” appeared to epitomise the victimisation of women as representative of Scottish history, “Widows of Culloden” would instead exemplify women as survivors. 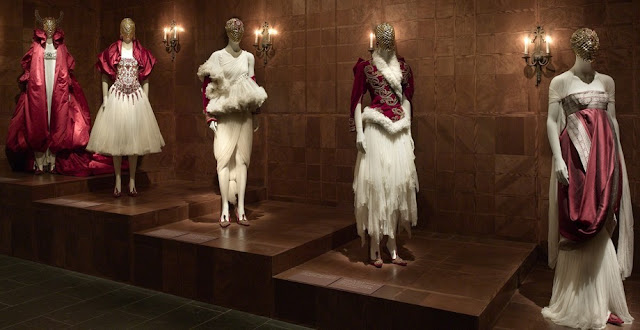 At the V&A exhibition, pieces from McQueen’s 21st century collections were showcased in a section titled “Romantic Nationalism”, with a note on the wall explaining the designer’s cathartic evolution from the “anti-romanticism” of the “Highland Rape” ensembles, in which he voiced his “defiantly political” view that “[w]hat the British did [in Scotland] was nothing short of genocide”. As evidence of McQueen taking a different approach to his designs later in his career, the description went on to cite his 2008 collection, “The Girl who Lived in the Tree”, as proof that “[d]espite [his] heartfelt declarations of his Scottish national identity, McQueen also had a deep interest in the history of England…” This, the note went on to state, could be gleaned from the designer’s influences drawn from legacies of the British Empire and a trip to India, which had resulted in “The Girl who Lived in the Tree” being his “most romantically nationalistic” collection. 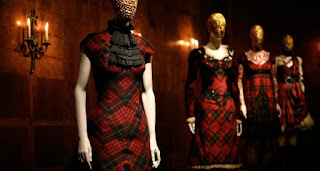 Clearly, the V&A had attempted to seek in McQueen’s use of Indian elements in his 2008 collection a nationalist tone that would serve as a salve to the rawness of Scottish history as evoked in the designer’s previous collections; this, because he could also look beyond his own ethnic background and bask in the glory of empire past as a Briton who then called England home. But it is rather difficult to see McQueen’s employment of Indian design traditions as testament of nationalistic pride given his vehemence against British overlordship in Scottish history. For example, a silk crepe, jacquard, and tulle dress from “The Girl who Lived in the Tree” collection makes vivid use of Indian embroidery and a style of draping synonymous with the way a sari is worn. However, the deep red of the fabric used in the dress bears visual continuity with the MacQueen tartan seen in the garments of the “Widows of Culloden” collection. The sanguine colour choice functions not only as a shared visual cue across collections, but also as a marker of shared histories of colonisation, and sometimes of bloodshed due to empire, across continents. 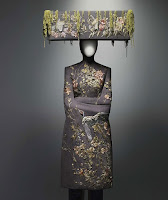 Even as his fashion provided commentary about the history of empire and its effects on women, McQueen’s clothing of women’s bodies was neither devoid of the objectifying of those bodies nor an indulgence of orientalism. While one of the final sections of the exhibition, titled “Romantic Exoticism” quotes McQueen as musing about how “[f]ashion can be really racist”, not least because it “[looks] at the clothes of other cultures as costumes”, it also lauds his exoticism as being “a form of creative translation”. Quoting the designer again, an exhibition note chronicles how he would “[take] elements of traditional embroidery, filigree and craftsmanship from countries all over the world … and interpret them in [his] own way”. Offered with no irony about the apparent co-optation, nor any awareness of the colonial elements inherent in such claims of cultural knowledge, the note was a reminder of how the exhibition both explored McQueen’s genius while being uncertain about how to manage the unwieldy afterlife of imperial and colonial influence.

From The Goan.
Posted by the nightchild at 8:39 AM No comments: 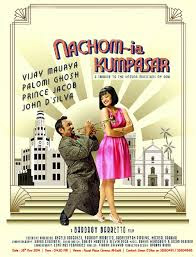 While in England, it was wonderful to hear news of Bardroy Barreto’s film Nachom-ia Kumpasar (2015) winning the Lebara Play Audience Award at this year’s edition of the London Indian Film Festival. Just a few weeks prior, I had the pleasure of watching the movie with my parents at Panjim’s Maquinez Palace. The experience was memorable for many reasons, not least of which was that the film recalls the yesteryear soundtrack of my parents’ generation, as evidenced by the fact that I could hear my mother and others of similar age in the audience singing along to some of the songs. But as further proof of the cultural legacy of the music popularised by Lorna and Chris Perry, whose lives are fictionalised in Barreto’s film, I was additionally struck by how the twenty-somethings seated in the row in front of me would also lend chorus to the songs, many of which still play on Goan radio stations, today. It was quite the tribute to Konkani music of the 1960s, as is indeed the film Nachom-ia itself. While mainly telling the story of the relationship between its main characters, the musician Lawrence Vaz and younger singer Donna Pereira, their affair unfolds against the backdrop of the Indian film industry and its relationship with Goan musicians half a century ago. 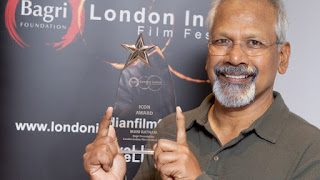 In Nachom-ia, the highs and lows of Lawry and Donna’s relationship seem to function as a barometer of the fortunes of Goans in early Bollywood. Set primarily in Bombay, with a few scenes taking place in Goa, the film chronicles the lives of Goans in newly independent India, featuring such locations as the kudds set up by village associations in the big city. Generally bachelor societies, the kudds served as homes away from home for Goan men, and continue to function as stops for travellers to this day. And though the film has a largely male cast, it is clearly Donna’s trajectory as a singer and a woman that is the impetus of this movie. Over the course of Nachom-ia, we see Donna become more independent even as her romance with Lawry ebbs and flows. Coming from a sheltered home, Donna’s mother is epitomised as being an overly protective Catholic woman who chastises her daughter about cavorting with musicians and skipping church choir practise. It comes as much as a surprise to the audience as it does to Donna that her love interest, Lawry, is married and is soon to be a father. All of Mrs. Pereira’s concerns about her daughter’s future appear to now be warranted, for how is Donna to be a marriageable prospect if she does not matriculate, hold a serious job, or keep up with her churchly duties, leave alone stop seeing Lawry?

Yet, Barreto’s film is not a tale of failed morality, or solely one of failed love. When Donna declares to her quietly sympathetic father that the only thing she will ever be married to in this lifetime is music, Nachom-ia bears witness to a woman’s ambition apart from her relationship to men. It also foregrounds the possibility of cultural production as being a field that is viable professionally; in looking at the recent past of Goan artistry, the movie enquires of Goans how they regard the arts and artists today, and especially Goan women who are involved in such pursuits. Interestingly, the film also subverts gender roles when, for instance, it portrays men as gossips; this is the case with three men who have recurring appearances in the film as the village tell-tales who gather by a cross to share the latest information about goings-on in the community. Nonetheless, the film does not entirely demonstrate the empowerment of its women characters. More could have been done with the role of Lawry’s wife, who appears to be wilfully ignorant of her husband’s affair. Another trope in the film is that of the long-suffering woman, as is borne out in the later disappearance of Donna from the music world, and life itself. 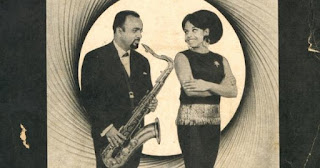 On the one hand, Donna’s withdrawal from performing is meant to signal the poor hand dealt to Goan musicians who were once the lifeblood of Indian cinema. Even though she parts ways with Lawry, Donna continues to be successful, her pain fuelling her simultaneous descent into alcoholism but also her spirited performances. It is further proof that despite Donna’s turbulent relationship, the entertainment industry provided her with opportunities to support herself. But the change in the industry and its lack of recognition of Goan talent, in turn, affected the professional and personal lives of people like Donna and Lawry. But even within this exploration of filmic history and its impact on Goan musicians and singers, Donna’s suffering, as manifested in her self-exile from the thing she loved most in life, is over-emphasised especially because she is a woman who loses out on the love of a man. The film does ends on a note of hopefulness, and one hopes it signals a new wave of Goan cinema that has many fine stories to tell.

Posted by the nightchild at 10:32 AM No comments: