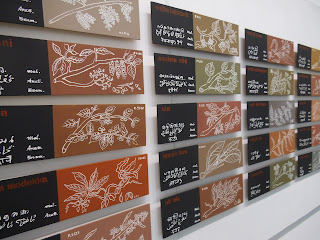 Neatly arranged rows of brightly-coloured panels greet the eye, offset against the surgical theatre whiteness of the walls of the gallery. There’s an apparent science to these images that pay painterly homage to nature. “The New Hortus Malabaricus” is German artist Wilhelm Bronner’s contemporary reinterpretation of a seventeenth century botanical treatise which contains the first block-printed evidence of Konkanni in Devanagiri. Bronner was on hand to converse with visitors to the Sanskruti Bhavan art gallery at the Krishnadas Shama Central Library where his work was displayed between 19th and 23rd February, 2013. The exhibition was organized by the Government of Goa’s Directorate of Art and Culture.

The original Hortus Malabaricus catalogued 742 plants from the Malabar Coast. Comprising of twelve volumes with descriptions in Latin, Malayalam, Arabic, and Konkanni, it was published between 1608 and 1703. The Konkanni contribution came from the physicians Ranga Bhat, Vinayak Pandit, and Appu Bhat who were part of the team that worked on the compilation, connoting a cultural and linguistic connection to Goa within the annals of the history of science. 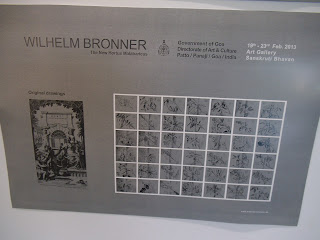 Bronner’s take on the Malabaricus revisits colonial history and the power relations inherent in classification projects. In the exhibition notes, the artist states: “The scientific work has to be seen as an unusual cooperative work between the Dutch invadors [sic] and the local people. Over a period of 20 years Adrian Van Rheede, Govenor [sic] of Cochin and the Malabar Coast and Itty Atchuthan, head of the local Brahmans were constantly working together.” What made such an association “unusual”? The Dutch bested the Portuguese in Cochin in 1663, evidencing the linked histories of the European colonization of the Malabar Coast and Goa. However, the collaboration between the Dutch and the native elite, even if in the confines of a colonial hierarchy, speaks to the perpetuation of institutionalized authority. For the Dutch, Bronner muses, the Malabaricus mission provided knowledge of local medicinal flora, guaranteeing their health in a foreign land. Likewise, their native counterparts offered expertise which assured their own status would not be destabilized, Bronner adds. 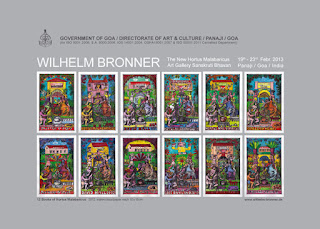 Not without whimsy, the artist’s twelve comical versions of a classical illustration from the older Malabaricus render a genteel European and her infantilized attendant labourers in flamboyant colour. This irreverent departure from the solemn black and white of the Early Modern period paints the picture anew. It invites viewers to look at the botanical project for how it parallels the ordering of plants and human interactions in the convergence of science and art amidst the multiple hues of history. 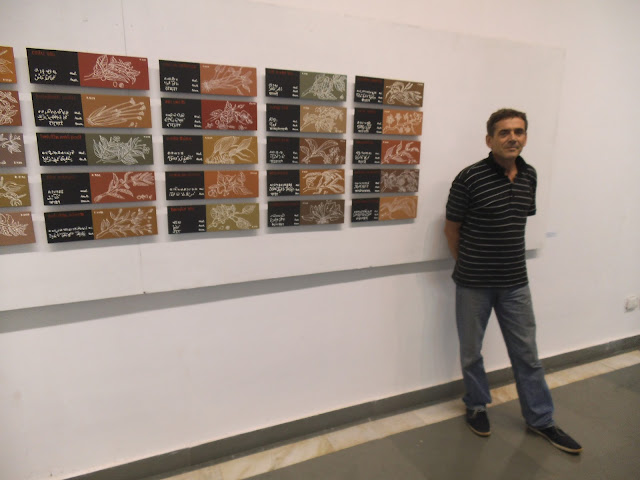 Posted by the nightchild at 11:14 AM No comments: 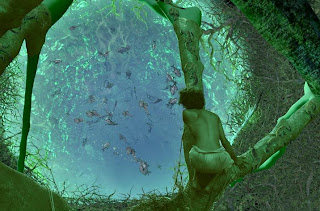 In Oscar-winning Ang Lee’s Life of Pi (2012), based on Yann Martell’s novel of the same name, an Indian boy reverses Christopher Columbus’ fifteenth century oceanic journey by travelling to the west from the “Indies,” but finds himself in the middle of nowhere, instead. That nowhereness is signified by the strange island that Pi arrives at in the course of his perilous voyage with Richard Parker - the Bengal tiger he is saddled with and tames while lost at sea. The island, populated by meerkats, sustains by day and kills by night – its inlet waters turning toxic. Pi is to discover later that the unpeopled island features on no known map. 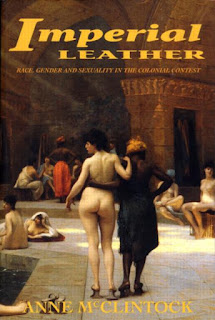 Columbus’ own unmapped wanderings “about the Caribbean in search of India” are referred to in Anne McClintock’s Imperial Leather (1995) as having caused the explorer to “[write] home to say that the ancient mariners had erred in thinking the earth was round. Rather, he said, it was shaped like a woman’s breast...” In likening Columbus to a lost infant seeking “a cosmic breast,” McClintock identifies “the female body ... as marking ... the limits of the known world...” She adroitly analyzes the European encounter with the “New World” as one replete with a coeval anxiety of the loss of and desire for “the female body,” which is at once maternal and erotic.


Women’s bodies were as much the metaphor of exploratory longing as the theme that caused this year’s Oscars to hit an all time low. The 85th Academy Awards opened with the song “We Saw Your Boobs” - vexing for many reasons, not least the undermining of professional women by a still largely white boys’ club. That the song was sung by the Gay Men’s Chorus of Los Angeles, only further proves how the pursuit for mainstream acceptance can devolve into a minstrel show of insensitivity to other minorities. Breasts, it would seem, continue to denote the confusion men have with shifting boundaries, both in the landscape of the film industry and in commerce generally. Note Oscar host Seth MacFarlane’s conflation of xenophobia and misogyny in a joke that simultaneously acknowledges and belittles gender and ethnic diversity when he said of Salma Hayek that it mattered little if she could be understood or not, because “she’s hot.” 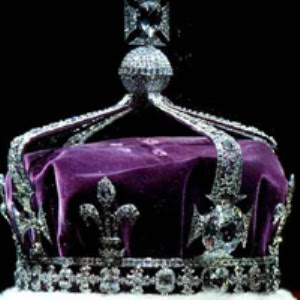 The incestuousness inherent within Columbus’ hunt for the elusive feminized unknown was intensified by “dreams of pepper and pearls,” McClintock adds, combining the allure of rare foreign goods with domestic necessity. It is reminiscent of the quest for spices and converts by Columbus’ contemporary Vasco da Gama, the Portuguese explorer who did find the sea route to India in 1498, leading to Goa’s later conquest by Afonso de Albuquerque. And while the Prime Minister of a certain island refused to return that famous crown jewel to the former jewel in the crown, David Cameron’s visit last month made it quite clear that the desire for the erstwhile Indies has not tarnished. No doubt, globalization has added sparkle to India’s brand as its economic fortunes experience a sea-change. The island Pi “discovers” is like this rediscovered India - it could never be unknown. Its existence is already prefigured, first by the colonial past and, then, globalization. Life of Pi is quintessentially emblematic of the latter, what with its having been written by a French Canadian, directed by a Taiwanese American, centred on a French-named Indian boy and a Bengal tiger with a British moniker, who are lost at sea upon the sinking of their ship – a Japanese vessel headed for North America. The course is set and new jewels are up for grabs.


To see this article in its original appearance, click here.

Posted by the nightchild at 6:13 AM 2 comments: