In exploring how Goans with familial ties to Pakistan are dispossessed through the Enemy Property Act, Konkani film Enemy? questions the state’s relationship to the nation. 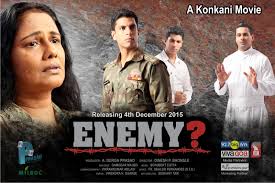 Saturated as much with colour as symbolism, a pivotal scene in the film Enemy? (2015) comes to mind in epitomising the film’s success in delivering its message, but also its heavy-handedness. Set against the backdrop of a deeply hued sunset, a meeting between an informant and government officials ends with the former satisfied that the evidence he has offered about an enemy property in his village will allow him to occupy the seized house, which belongs to a relative. Upon his departure, the representatives of the Indian state deliberate over their own designs for the grand old edifice, and smirk about how they have duped their Goan informant. As they bask in the moment, the iconic beauty of Goa sparkles in relief behind them, palm-fringed and sun-drenched. Revelatory, even if heavily didactic, the audience is given to understand that the relationship of India to Goa is one of desire – a covetousness of its land, accompanied by a disregard for its people, both facilitated by law.

Directed by Dinesh P. Bhonsle, the plot of the Konkani film revolves around events that transpire in relation to the seizure of a family’s ancestral home under the aegis of the Enemy Property Act of 1968. Created in the aftermath of the India-Pakistan War of 1965, the Act was instituted to allow the Indian government to take over the properties of those deemed citizens of enemy nation-states. The Act targeted Pakistani nationals, and primarily those who would have been displaced by Partition, post-Independence, but as Enemy? reveals, it also affects the lives of many with a tangential connection to Pakistan.

Despite attempts to amend the Act in 2010, its intent remains problematic, as does its name. An op-ed in The Hindu notes: “The issue is simple: the property rights of a section of Indian citizens were wrongly taken away and a limited attempt is now being made to restore them. In fact, the government should have … change[d] the very name of the Act, which not only projects a wrongful image of Indian Muslims, but also implicitly carries the suggestion that all Pakistanis are enemies of India. As the ‘enemy properties’ were left behind by migrants to Pakistan, not during a war but due to the exigencies of Partition, there was never any justification for the name …” (28 October, 2010). For the many Goans targeted by this Act, it was not Partition that cleaved them from their land, but the annexation of Goa by India.

In flashbacks, Enemy? communicates how Mrs. Almeida, a widow, came to own the home she loves so much. Shortly after she is married, the newly named Mrs. Almeida discovers that her father has a second family in Pakistan, where he is employed. Upon this revelation, his Goan wife asks him to leave for good. In bidding his daughter farewell, he bequeaths the house to her, and tells her to take care of it and her mother. Mrs. Almeida, at first tearful, steels herself and, like her mother, spares no more pity for her cheating father. From then on, she takes residence in the house and comes to raise her only son there. As must now become clear, Mrs. Almeida is dispossessed of this very house, because her father was a Pakistani national and the house was not officially in her name. Envisioning the Church as a supporter of the community, rather than a patriarchal force, the film uses the figure of Father Britto – a friend of the Almeidas – to stress the need for Goans to be more mindful of legal matters pertaining to land ownership. 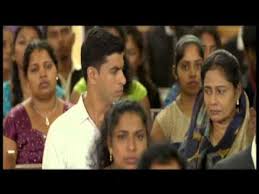 Despite Mrs. Almeida’s son being a Captain in the Indian Army, they are evicted. That her son is named Sanjit is meant to indicate the change in political dispensation between the time of Mrs. Almeida’s father’s employment in Pakistan and then her son’s occupation in the Indian armed forces. It was likely Mrs. Almeida’s intention to have her son ‘blend in’ in a post-Independence India by giving him the more Hindu-Indian name of Sanjit in comparison to his Portuguese Catholic family name. Yet, neither this nor his allegiance to the nation as a soldier is sufficient in helping the family regain their land.

As the aforementioned flashback chronicles, it was not uncommon for Goans from Portuguese India to work in Pakistan when it was part of the British Empire, just like India once was. In effect, Portuguese India had a very different relationship with the world outside itself in comparison to the contemporary associations between post-Independence India and those countries it has named its enemies. That Goans now finds themselves trapped within the political machinations of histories external to their own is epitomised by the plight of those affected by the Enemy Property Act. The appropriation of the Almeida home is thus symbolic of a double occupation, where law and postcolonisation combine to ostracise Goans within their homeland and the nation that claims to be their home – further proof of the region’s status as the colony of a postcolony.

From The Goan.
Posted by the nightchild at 1:18 AM No comments: